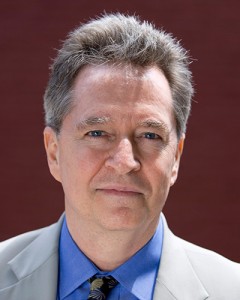 Ken Cook, president and co-founder of Environmental Working Group, is widely recognized as one of the environmental community’s most prominent and influential critics of industrial agriculture, U.S. food and farm policy and the nation’s broken approach to protecting families and children from toxic substances.

Under Cook’s leadership over the past 20 years, EWG has pioneered the use of digital technologies to expose the harms done by misconceived crop subsidies, crop insurance and runaway agricultural pollution. The organization has also empowered American families with easy-to-use, data-driven tools to help reduce their exposure to potentially harmful ingredients in foods, drinking water, cosmetics and other household products. These unique digital resources are searched hundreds of millions times by consumers, journalists and policy makers.

In the 1990s, EWG’s research was a major factor in the passage of the landmark pesticide reform law, the Food Quality Protection Act. EWG was among the first to draw attention to the health threat posed by the weed-killer atrazine and conducted the first extensive tests for the chemical in tap water in 29 Midwest cities. In the last several years Cook and EWG have been in the forefront of national and state campaigns to require the labeling of foods that contain genetically engineered ingredients.

CapCapitol Hill’s closely read The Hill newspaper regularly lists Cook in its annual roster of Washington’s top lobbyists. In 2013 it said Cook’s “influence spans the country” and called EWG “the tip of the green movement’s spear when it comes to agriculture and food policy.”

Cook is a board member of Food Policy Action (and founding chairman), Organic Voices and the Amazon Conservation Team and a former member of the board of the Organic Center. He earned a B.A. in history, B.S. in agriculture and M.S. in soil science at the University of Missouri-Columbia.

He is married to Deb Callahan and lives in northern California with their young son, Callahan.